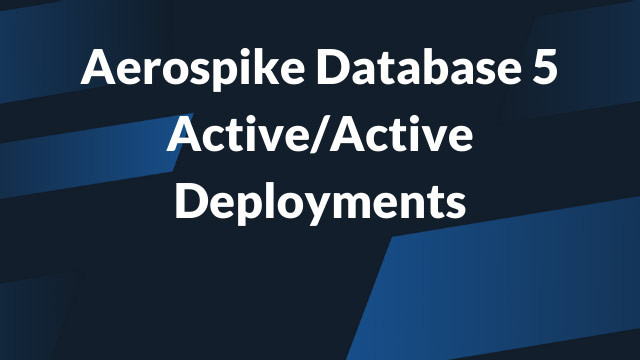 In the new digital environment, national and global brands must field applications that are always-on and perform in near real-time. This has led to the adoption of distributed technology for applications as well as the databases serving those applications. In order to best serve a wide geography and to gain higher levels of availability, organizations have distributed their digital presence across geographies, whether data centers of their own, or the zones represented by the public cloud vendors, or a combination of both. In order to tackle the challenges of maintaining a global view of business transactions that occur in this distributed realm, Aerospike supports two distinct active-active deployment models, multi-site clustering and cross datacenter replication (XDR):

Both models above are active-active and enable Aerospike to be used in a wide variety of transactional use cases.

In a multi-site clustering configuration, the nodes comprising a single Aerospike cluster are distributed across sites. A site can be a physical rack in a datacenter, an entire datacenter, an availability zone in a cloud region, or a cloud region. Here are a few examples:

In all four examples, it is assumed that every rack has the same number of homogeneous nodes, so system capacity per rack is identical. A common practice is to ensure that the replication factor is set equal to the number of racks. A multi-site cluster relies on the distributed clustering algorithms intrinsic to Aerospike itself, independent of the distance between sites.

With an Aerospike cluster configured for Strong Consistency (SC), a multi-site cluster guarantees that all writes will be replicated across sites without data loss. The write logic is shown in Figure 1. All application writes are sent to the node that contains the master copy of the partition which then coordinates a two-phase write process with every replica before the system returns success to the client. In case a write to one of the replicas fails, the master will ensure that the write is completed to the appropriate number of replicas within the cluster (or sub cluster in case the system has been compromised.)  Also, note that the Advice Replicated messages are not sent for replication factor 2 in most circumstances (exception being the case where the acting master isn’t a replica).

Such a system can survive the loss of an entire site (rack) with no loss of data and continue to operate. Therefore, such a cluster is an active/active configuration with both strong consistency and availability during site failure scenarios.

The main trade-off is dealing with low latency of writes and reads. 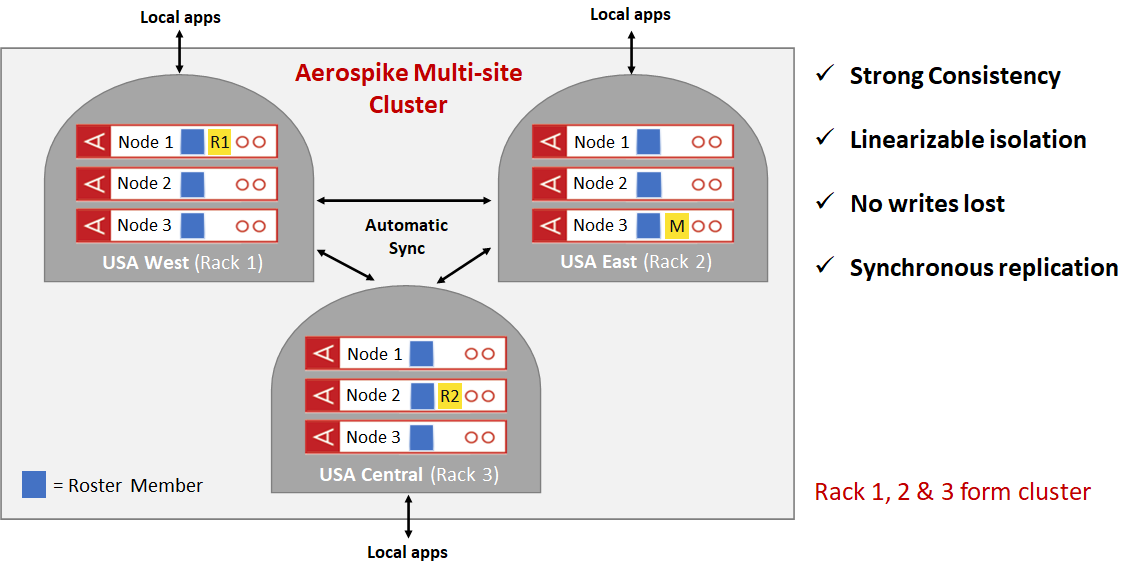 The cluster illustrated in Figure 2 consists of three racks in three sites with a replication factor of 3. Therefore in this case, every site has a full copy of the datas. Reads are localized per site to maintain low read latency and write latency can be anywhere from a couple of milliseconds to a few hundred milliseconds depending on the geographic location of the sites and the distance between them.

A cluster such as the above will preserve strong consistency, avoids data loss and preserves availability on single site failures.  In Figure 3, Rack 3 is disconnected from the cluster and forms a split brain with racks 1 and 2 forming the majority sub-cluster and rack 3 forming a minority sub-cluster. Using information in the Roster that is shared between all of the nodes of the original cluster, the system uses the strong consistency algorithm of Aerospike to ensure that there are no writes lost, and no operator intervention. The majority sub-cluster comprising racks 1 and 2 continues to take both reads and writes while creating a temporary third copy of data items that are being written during the split-brain event. The minority sub-cluster remains up but is unavailable for application reads and writes. Once the network split is repaired, the nodes of rack 3 join with the rest of the nodes and form a complete cluster comprising racks 1, 2 and 3. At this point, the third copy of the items updated during the split brain event are properly transferred to the appropriate nodes in rack 3 so that the system can revert to steady state. All of this happens with no operator intervention, preserving strong consistency with no data loss and complete availability during the split brain event. There are many such failures that are handled automatically ensuring that most site failure events are handled automatically. 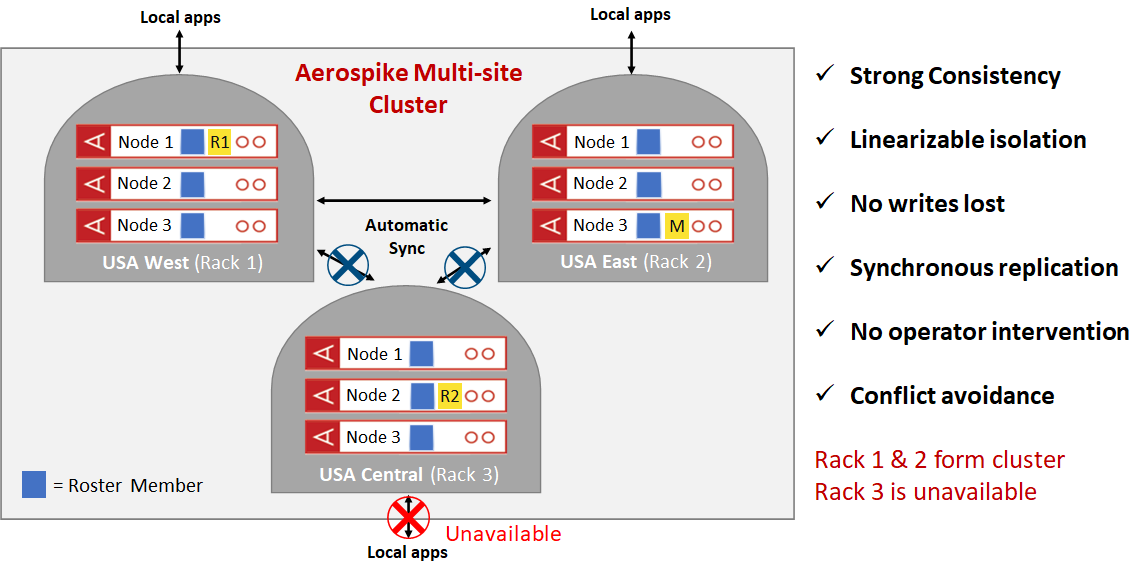 With multi-site clustering, Aerospike Database 5 delivers strong consistency, geographic data distribution, elasticity and performance, making it the best choice for any enterprise that requires a geographically distributed transactional system at scale. Aerospike multi-site clustering is built on a real-time, always-on, active-active architecture, enabling a new class of use cases for global enterprises where the requirements for strong consistency, elastic scaling, high performance and resiliency are non-negotiable.

Multi-site clustering uniquely combines strong consistency with support for large scale, globally distributed transactional applications that are able to relax the write latency, which varies based on the distance between sites of a cluster, while still delivering sub-millisecond read latency at high throughput. As described earlier, Aerospike multi-site clusters can be architected to survive site failures with no operator intervention while, at the same time, delivering strong consistency with zero data loss via conflict avoidance.  This eliminates the need for application complexity and/or human involvement in resolving conflicts.

Aerospike Database 5 delivers a new XDR (Cross Datacenter Replication) implementation based on an active-active architecture with asynchronous replication between clusters located at different geographically distributed sites.  A site can be a physical rack in a datacenter, an entire datacenter, an availability zone in a cloud region, or a cloud region. Here are some examples.

XDR (active/active or active/passive) can extend the data infrastructure to any number of clusters with control, flexibility, ease of administration, faster writes, and regional autonomy.

The new XDR shipping algorithm is based on a record’s last-update-time (LUT) resulting in simpler and efficient metadata management than the logging mechanism used in earlier XDR versions. LUT-based shipping allows easy resynchronization of a data center starting at a specific point of time in the past. Furthermore, the new XDR supports dynamic configuration of and independent shipping between any pair of source and target sites.

Often there is a natural separation of datasets on a geographic or some other basis. In these cases writes in one region that need to be replicated to another have a very low probability of conflicting with plesiochronous writes in the other site. For use cases that can operate with a level of relaxed consistency, it may be best to optimize the write and read times for the bulk of the transactions by handling potential inconsistencies caused by write conflicts within the application code. For these use cases and others, XDR can support sub-millisecond latency for both reads and writes.

In an active/active setup (example configuration 2 and 3 above), the asynchronous nature of the replication mechanism could cause a consistency issue if concurrent updates are made to the same data record in multiple sites at the same time, also known as conflicting writes.

Assuming the entire record is shipped on every write, inconsistencies can occur. The changed record at one site could be in-transit via XDR to the other site, while the changed record on the other site is simultaneously shipped by XDR to the first site. The result is either the record ends up having different values on the two clusters or one of the two updates is lost (assuming some kind of timestamp-based resolution of the conflict).

There are ways to mitigate this situation. For example, the XDR shipping mechanism might work at the bin level, tracking bin update times in addition to record update times. This technique, known as bin projection, will ensure that different bins of the same record can be changed concurrently at different sites without violating data consistency. It should be possible to merge the records properly on both sites using bin level update times.

Even with shipping bin level changes, concurrent changes to the same bin in multiple sites can result in inconsistencies analogous to those described above for the record level. We will either end up with two different values for the bin in the two sites or one of the two values will be lost.

An often suggested alternative is the conflict-free replicated data type (CRDT). However, consistency approaches such as CRDTs only apply to a small subset of data types, typically counters and sets, and do not help with most other data types. Network interruptions, which are amplified over distance, as well as nodes, zones or regions going down all ensure that data inconsistencies will happen, and that writes will be lost.

One possible way to guarantee consistency in most cases for an active/active XDR deployment is to architect the application’s data access in such a way that conflicts on specific data items (records or bins) are completely avoided.

However, if write conflicts are allowed, the application needs to tolerate some level of consistency violations. The asynchronous nature of the shipping algorithms means that when a site failure occurs, the most recent updates from the failed site will not be available at the other sites. This means applications need to be designed and prepared to handle possible loss of data.

For an in-depth discussion, watch Strong Consistency in Databases. What does it actually guarantee? by Andrew Gooding, VP of Engineering at Aerospike.

Aerospike’s XDR enables enterprises to create a global data hub (Figure 4) that automatically routes and augments data captured anywhere in  the data center to wherever it’s needed – whether in Aerospike clusters or any other data repository.  Typically,  regulatory compliance is highly regional and the new XDR provides the ability to manage regulatory requirements such as GDPR and CCPA on a regional basis.

Aerospike can be run in active/active configurations with either multi-site clustering or XDR.

Both multi-site clustering and the new XDR work regardless of whether the data is stored in a private cloud, a public cloud or any combination of both. With these features, customers can now easily deploy powerful mission-critical systems in the most resilient manner according to their business needs. This choice of active/active topologies gives Aerospike users the flexibility they need for their mission-critical applications. 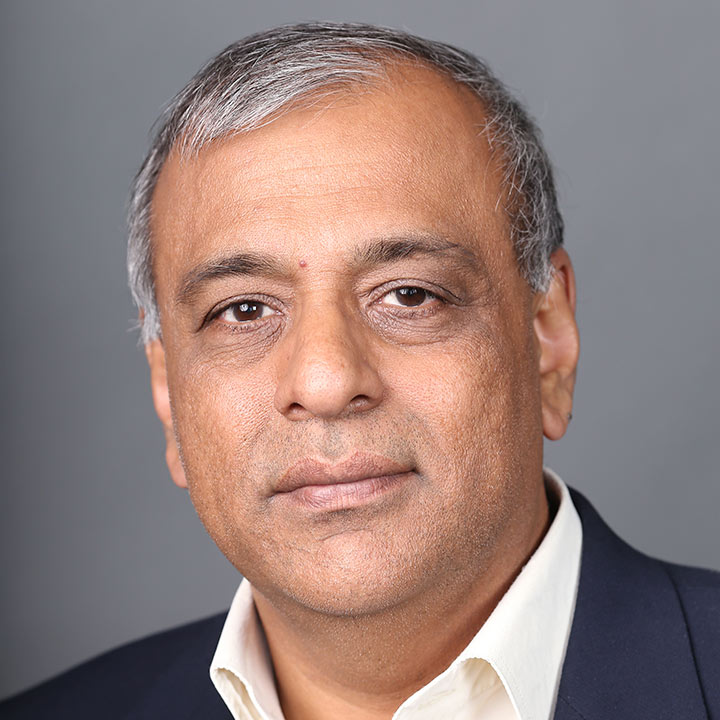 All posts by this author
Srini V Srinivasan is a Founder and Chief Product Officer at Aerospike. When it comes to databases, Srini Srinivasan is one of the recognized pioneers of Silicon Valley. He has two decades of experience designing, developing and operating high scale infrastructures. He also has over a dozen patents in database, web, mobile and distributed systems technologies. Srini co-founded Aerospike to solve the scaling problems he experienced with Oracle databases while he was Senior Director of Engineering at Yahoo. Srini has a B.Tech, Computer Science from Indian Institute of Technology, Madras and both an M.S. and Ph.D. in Computer Science from the University of Wisconsin-Madison.
< Previous Post
Next Post >